'A Spoonful of Murder.'

'A Spoonful of Murder' by Robin Stevens; a Murder Mystery book review by Erin the Cat Princess

Well, what a funny old summer it has been, and strangely my thoughts are, if not exactly heading to Christmas time, then thoughts of Halloween. Brrr, doesnt it just make you shiver and send the staff heading off to dig out the winter duvets!

Well, I say duvets, but this year we are trying something different. Mrs H is trying a weighted blanket, and a sensory sheet. Now if you havent heard of such things then do look them up as they help restless sleepers get a good nights sleep. Why she wants a weighted blanket when she has me to pin her to the bed I don't know, but hey ho, the ways of housekeepers are sometimes beyond not so mere princesses as I.

OK, enough of the pre-amble and lets get on with the show! 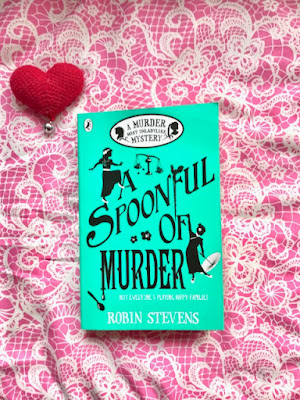 This week we are reviewing the next book in the 'Murder Most Unladylike' series, A Spoonful of Murder', By the fabulous Robin Stevens.

This time around Hazel becomes the lead detective when she and Daisy venture to Hazel's birthplace and home in Hong Kong.

When Hazel's beloved grandfather passes away, Hazel, as much through love as duty, travels home by boat to be with her father and mother, as well as her fathers second wife and her two encouragable younger half-sisters, May and Rose.

Don't worry, family stuctures in Hong Kong are very different to those in the west, as Daisy soon realises. Daisy, the architypal British aristocratic daughter of a lord, also realises that she is a fish out of water, and that Hazel, who has never made much of her family wealth and standing, is actually a bit of a 'dark horse'. But, in true Daisy like fashion, she aims to make the most of the trip and learn as much as she can to fit in.

Now this is all scene setting, and there is NO mystery in Hazel's Grandfathers death. But, there is a surprise that triggers the series of events that creates a fantastic adventure for the girls. On arriving home, Hazel discovers that she has a new baby brother! A step brother by her father's second wife. Hazel is devastated, not least because she hasnt been told before now. But things run deeper than just that. With a new baby brother, her place as the eldest child and apple of her fathers eye is automatically usurped in favour of Teddy, the baby. Despite his age, he will rule the roost as the son.

Emotions run high for Hazel, as I am sure you can imagine. But, these get put, if not completely to one side, then slightly out of focus when Teddy is kidnapped, and his nurse maid, who was Hazel's own whilst she was growing up, is murdered.

Now at this point things really do take off. There is, like all of these books, a great selction of characters and events and clues to be considered by the two detectives. Add to this that the girls get embroiled with the local Triad gang, risking their own safety in the process, then we have a bowlful of even more Murder Mystery and Suspense to captivate the avid reader.

I shall leave it there for the review, as to go further will, I think, spoil the fun.

This is a wonderfully crafted continuation of the series, that touches on many aspects of society, values and predjudices, as well as emotions and driving forces. It is also a jolly good read!

Mrs H and I both loved this new and orignal adventure, especially meeting May and Rose, Hazel's sisters. We will, I promise, get to hear and see more of them as time goes by. I have to say I learned a lot from this book, and think a younger reader will too. Most of all we both loved the way the plot accelerated and developed as the girls fought against the clock to get Teddy back and solve the murders!

It is also heartwarmimg, and gratifying. We truly cant praise this book enough for what it brings to this genre, and the age range – and beyond. The series, which I must confess Mrs H has now read up to date, but keeping the endings to herself, has been a constant bedside companion.

If you'd like a Spoonful of Crime with your morning oats, muesli or granola, please do support your local bookshop first.

Next time I will be reviewing the next major book in the series 'Death in the Spotlight'.

OK, so that is it from us here at the Palace. We will return, editorial work on our own adventure novel permitting, in a week or so time.

Till then, we hope your own spoons will be filled with nothing more sinister than lukewarm porridge!