Today be Talk like a Pirate Day, aye that it be!

And how better to celebrate such a fine day as to share a bottle of grog or nip brandy with a few pirate friends and look back to this time last year when my friend and soon to be shipmate, Valentine aka the Dashing Count Prince von Valentino, set off on an adventure of a lifetime across the oceans and into hitherto unknown depths of the land, scale new heights and generally boldly go where no cat or pirate has gone before!

Yes you guessed it, the vets in Tortuga!

OK, OK I don't mean that sort of adventure, more the sort with treasure, love, monsters, romance, shopping and TONS of cheese. Not forgetting some horrid monsters, and a heinous villain!

Then Valentine and I are VERY PROUD to announce that our adventures are soon to be published!

Yes, look out for the all new, hand re-written by computer (with the aid of Captain Kerry and Mrs H) special edited and finely illustrated book of the adventure that will be hitting the bookshelves of your local pirate bookstore very soon!

To give you a taster, and to help you for your own adventures, here's a few points on how to set you off on a new journey of adventure!

First make sure you're comfortable..... 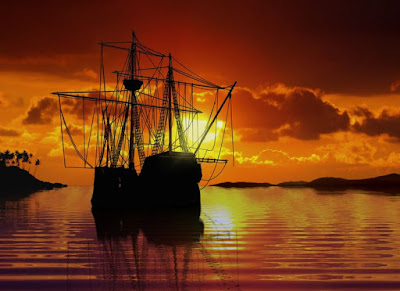 "The warm and gentle rocking of her ship soon drew Erin from her reverie and into a deep and restful sleep. Overhead the sky was clear and the stars shone brightly. The cat in the crow’s nest wrapped a blanket around his shoulders and took a swig from his bottle of nip rum, purloined from the Spanish ship’s stores before they were sent on their way. He, too, drifted off and fell into a deep and intoxicated slumber, counting white mice as they ran before his lidded eyes.

On the horizon, some storm clouds were gathering, and amidst the clouds, had the lookout been awake, he'd have seen a small black sailed ship, was emerging—a ship that flew the Jolly Roger!"

Then Make sure you have locked the door and got the cats in....

“Best check what's up with the crew. If them scurvy cats have been at the nip grog it will be the dog-o’-nine tails for them!”

Erin strode over to the large wooden door that led onto the deck, and burst forth into the sunlight.

“Right you scurvy. . . .  Er. . . . Mice?” Her jaw dropped for a moment and then snapped shut as she surveyed not her crew, but a mouse, who hands on his hips, stood before her. “Umm, excuse me,” she said. “But this is my ship and I don't seem to recall saying that mice are allowed onboard!"

"Squeak. It's CAPTAIN to you, cat. I'm Captain El Mignon Mouse-Morsels, pride of the Spanish pirate fleet, the scourge of the seas and larders throughout the known kingdom, and this 'ere is a hi-jacking. Arrr," said the decidedly plump pirate mouse, no bigger than, well, a mouse really. "Give us all your cheese and cream or the crew gets it!"

It's always pays to be nice to strangers you meet at sea... 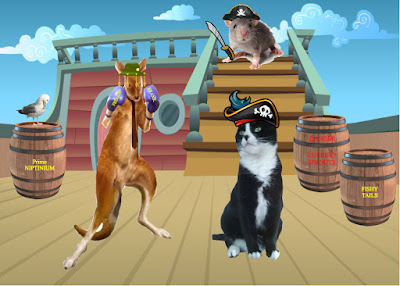 They eyed each other up and down. Mentally, Erin checked off all a mouse's attributes to see if this guy was really a mouse. Long tail? Yup. Short front legs and longer back? Yup. Long pointy nose and irritating chewing habit? Yup. Long hopping stride and weird accent? Not sure, but anything's possible after some of that cheap nip grog she’d had last night, she thought!

"Arrr, G'day sport," Freakin' Frank said. "Give 'em the cheese or your crew gets to swim with the fishes, OK! OH, if you have any small kegs of grog, mine’s a Fosters!"

Well you could have knocked Erin over with a nip mouse. How often do you find a huge talking mouse wearing boxing gloves on your ship?

Should you get lost or your ship gets pinched, it pays to carry your Gold Credit Card..... 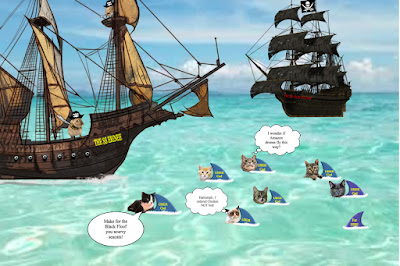 "Great plan, Scottie, but I have another place to call which may be quicker!" Erin hit speed dial to the Association of Pirates. After going through the usual options, press 1 for Home Start, 2 Plundering, 3 for Treasure maps, she eventually got to the option she wanted, namely press 911 for rescue from being marooned or dumped overboard! Within seconds a fleet, or should one say school of fish, came to give Erin a tow.

"What's this?" Scottie said all shaken by the presence of fins streaking through the water.

"This, my Scottish mate, is what's called the 'Pirates COD'. One of the perks when I took out the Association of Pirates Gold Credit Card last year."

When hiring a carriage, always check to see if your driver wants paying before or after he leaves you....

A sudden squeal from the team of horses roused Erin from her thoughts of Silver and the zombie pirate mice. The carriage had pulled to a halt so quickly the horses leather harnesses and the coach groaned and creaked and ripped as they were stretched to near breaking point from the G-force.

Gathering herself, Erin grabbed the sabre from her belt and stood firm, waiting for a sound–some indication as to the trouble or circumstance for their abrupt stop.  Seconds passed in what seemed like hours until finally, Erin could wait no more and drew back the curtain behind where the driver sat–where he should have sat, for he was gone, vanished all but for his boots and a warm dry patch on the seat.

When fighting villains it pays keep calm, try to hang on to your ears (and hair)and hit them where it hurts.... 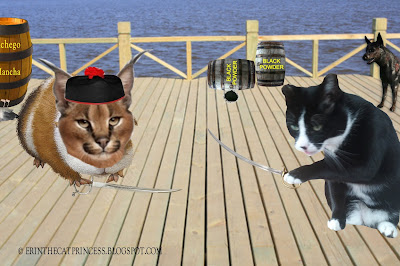 Not waiting for her to recover the blade, Camembert's sword swished through the air. "Well my pretty thing, where shall I start? A bit off a side, senorita, right side I think."

The blade sliced across her right flank and sent a spray of white and black hair falling to the dock. He was playing with her and meant to have his cake and eat it too, she thought.

Erin gave a gasp, and clutching her side, she slowly sank towards the dock. The Cardinal, thinking he'd scored a hit, relaxed as she'd hoped and gave her the grace she needed to take action. Before her knees had touched down, she cartwheeled forwards, and grabbing her sabre, drove it at the Cardinal, piercing his robes. The swiftness of the attack caught him unaware, but the heavy cloth saved him from all but a small wound. And whilst it didn't disable him it did make him think of being neutered.

Once the action is over, and the heroes have got together, take time to do what every princess and prince should do, you know the naughty stuff that mums and dads do but dont want their kids to see..... Yes, kids, you got it:  GO SHOPPING! 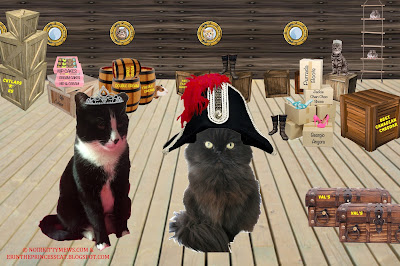 Such were the number of “delights” that the princess had procured that it took a clowder of the towns strongest single toms to get them all to the ship.  Valentino raised an eyebrow as the last of the eight shipping trunks was hoisted aboard. "A little light shopping my dearest one?” he said to the princess.  “I can see you have an eye for a bargain. I do hope you have something for me? I just pray it's not a lump of cheese or a fondue set! I've had more than enough of that to last several if not ALL of my nine lives!" 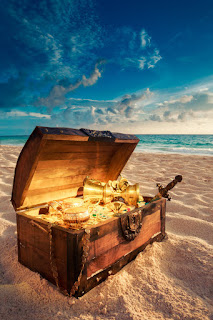 Well I hope you enjoyed glimpses at our adventure as was, and will be again once more, in super 3D turbo charged paperback form.

Till then, avast ye landlubbers, splice the mainbrace that's split, shiver some timbers, and heave-ho that dodgy fish sandwich at your peril over the side, and make sail for waters new!

Till next time, Yo Ho Ho and remember– it's the cat pirates that have all the fun. Arrr!

Captain ERin of the good ship The SS ERinee, and a jolly good egg.

PS stay tuned for updates on Pirates and Pussycats, coming your way between now and launch date...
Posted by Erin the Cat Princess at 07:36:00