Murder with your Mince pie, anyone?

With that dreaded season of goodwill nearly upon us, we bring you our last book review of the year.
Why dreaded I hear you ask?
Well, if you've ever heard the UMM (Upper Much-Mousing) carol singers, then you'd know why! And if the singing weren't enough, there is the annual "Great UMM Bake-Off." For those not familiar with the event, chefs from across UMM, who would, for the sake of public health and safety, be banned from entering a kitchen let alone actually cooking anything, are let loose to prepare a festive meal. To avoid cheating, anyone who has any skill, or can open a tin of beans, is automatically disqualified from taking part.
The prizegiving takes place at the UMM Charity Christmas meal for those in need (and those who have no breakable teeth, or taste buds) and is generally well attended. OK, the presence of so many paramedics is unusual. Still, the flashing lights on the ambulances do add some cheer to the event.
Afterwards, there is the annual Inter Village no-holds-barred ice-hockey match. Now for aficionados, there is one significant difference. The traditional puck is replaced by a selection of overbaked seasonal fare: mince pies, slices of Yule log, and Christmas puds. Mrs H tells me that they did once use turkey wings, but the aerodynamics of burnt wings were not conducive to the game staying on the rink! The winners are the team that can leave the pitch without limping or severe injury! If you plan to attend this culinary match, face masks and body armour, of the steel kind, are an absolute MUST! 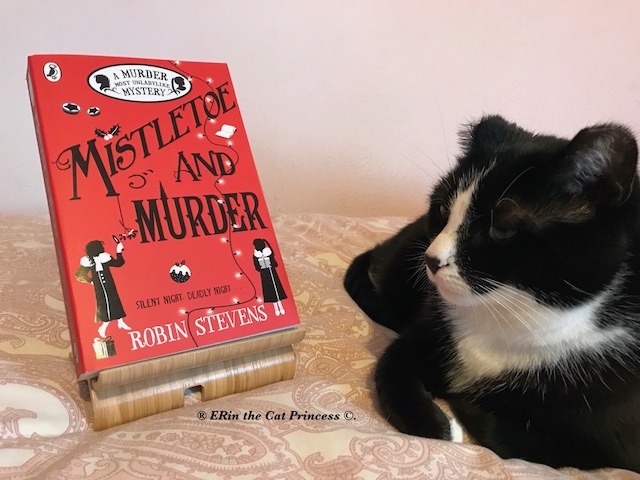 OK, so enough of the local goings on in Upper Much-Mousing, here's the book review. . . .

These last few weeks we have been reading book five in the Murder Most Unladylike series, titled: Mistletoe and Murder.

What's it all about?

It is a few days before Christmas 1935. Hazel and Daisy have managed to wangle their festive holidays staying in Cambridge with Daisy's brother, Bertie, who is studying at Maudlin College. Aged 14, the girls are looking forward to having an 'adult-free' time enjoying the delights of the city, cream teas and cake.

To add to the excitement Alexander, who the girls met on the Orient Express (See book 3 – A First Class Murder) is also staying at another college nearby. He has come with fellow Junior Pinkerton, George, and his brother Harold. Both Alexander and George are, of course, co-chair members of a rival detective society to that of the girls.

The girls learn that in Maudlin College, a male-only college, two of Bertie's fellow students Donald Melling & Charles 'Chummy' Melling are to throw a big party. It's their coming of age, and it happens to be Christmas day. Now it seems that Donald is always having nasty accidents, as well as being the butt of jokes played by his brother, Chummy. Nothing unusual there you may say, sort of brotherly acts of mischief, and you would ordinarily be right. BUT, On their birthday, Donald, who is ten minutes older than Chummy, will inherit a vast fortune. He plans to spend it on a dubious-sounding diamond mine somewhere, a fact that rankles Chummy no end. Tempers between the two are always flaring, and all seem to agree that Chummy should be the one to inherit. After all, he is the more likeable, more outward going, right?

But for our two sleuths, and the Pinkertons, the accidents happening to Donald can mean only one undeniable thing, someone is trying to bump Donald off. All fingers and facts point to Chummy.

Now how would you go about solving and preventing a crime that hasn't happened? Well, the two societies come up with a plan that will hopefully not only save Donald but decide whether the girls or the boys are the best detectives. The bet is that the first society to solve the crime-to-be and expose the villain will win. The winner gets the credit, and the loser has to publically proclaim that they are not the best detectives in town…….

The scene is set, and the action starts in this latest adventure, but suddenly, and somewhat unexpectedly, and also inconveniently, someone else is murdered!!!

To add to the adventure, the girls have been hamstrung: girls are not allowed to be in the college, in fact, the College Master has barred them.

Will there be blood spilt between the rival detective Societies? Will Daisy and Hazel fall out again? Will, there be romance this time around, and if so, who has their eyes on whom, and do they notice?

Will you ever be able to look at Mice Pies, Mistletoe and Port in the same way ever again?

All this and much much more will be revealed!

Alas, I can not say more. From here on in, the story is full of clues, and has more ups and downs – many literal, than you could shake a Latin textbook at. Needless to say, to get to the end, the detectives have to outwit each other the university students and suspects, and the police. Not forgetting Daisy's intimidating Great Aunt Eustacia, who is a Cambridge mathematics don, and some rather irritated University staff, who may have something to do with the crime/s. And all this as the clock ticks down to Christmas Day!

We really enjoyed this book. . . . OK, that is an understatement, it was brilliant! The plot, like the student lodgings in which the crimes and a lot of the action take place, have more ups downs and sideways moves than a snakes and ladders board, and clearly just as dangerous.

Intelligent, complex and fun, and a step up from the last adventure. This book ably reflects the time and gives a feel for the season and location – albeit in a localised way. The story does also reflect the time as far as the treatment and attitude towards women students is concerned, as well as the way non-English students were viewed. The subjects are well handled though and show the authors adeptness at writing for middle-grade and older readers alike.

Who should read this book?

We read with an open mind and to have fun. But we don't want to be spoonfed. This book, like the others, isn't patronising for the younger reader, and engaging for the older reader (in Mrs H's case, the ANCIENT reader!). So definitely suitable for ages 9 upwards (to ancient). We love the format of the book/adventure which has retained the first-person narrative (from Hazel). The book also includes a plan of the location and floor levels to the students' rooms. There are clues there if we can spot them, but if you fancy a ride, the story sails along like a punt on the River Cam, that flows through Cambridge.

Fancy having a read for Christmas? Then please do consider treating your thermal stockings to a copy. The audible version is just as good and could be winging its way into some readers virtual stocking in seconds.

If you'd like a spot of crime with your cranberries or Murder with your Mince Pies, please do support your local bookshop first.

And now, my pre-UMM Bake off snoozie selfie – I'll be needing all my energy for the big match, mainly so I can avoid the flying pies! 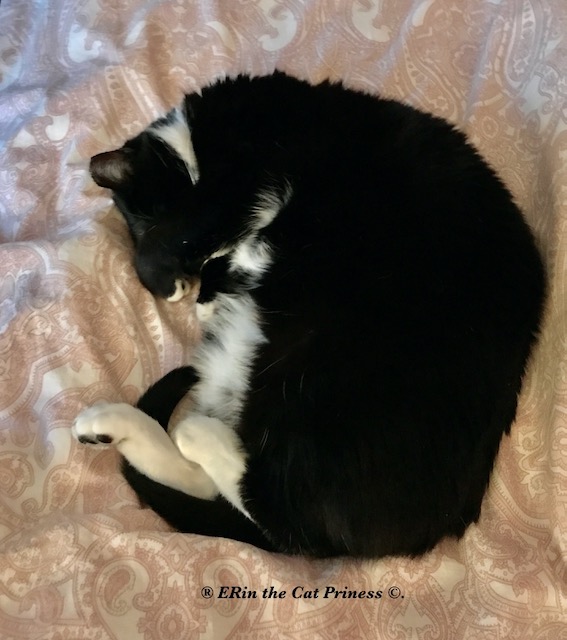 Next time I will be reviewing Book 6 in the series.

OK, so that is it from us here at the Palace. We will return, injuries and indigestion permitting, sometime in January, when all the empty sweet papers have been swept up, and the leftover turkey (Mrs H's) has been confined to my tummy.

Till then, we wish you all a safe, happy, mince pie and pudding filled – with the occasional sherry or five – few weeks! 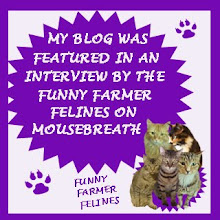