WHAT ABIGAIL DID THAT SUMMER.

A 'RIVERS OF LONDON' Novella,  by BEN AARONOVITCH.

This week, we have something really rather different but supremely special. What Abigail Did That Summer is a spinoff novella from the Rivers of London series of books, by the hugely brilliant, Ben Aaronovitch. Needless to say we both are totally addicted to this series and pounce on any new book that comes out. To be accurate, I get Mrs H to pounce on the postman the moment they leave the sorting office!

Before we get started it will help to have a bit of background info on the Rivers series.

The Rivers of London books are wonderful detective series, infused with magic, all manner of river spirits, faye and modern-day villains equiped with magical skills. For the greater part they are set in or around London and the UK. The lead protagonist, Peter Grant, is a police constable, and erstwhile apprentice wizard. OK, so in actuality they prefer the term of Practitioner. But anyone who wields balls of light, can stop bullets and can blow holes through things like his one hundred years plus police boss, Inspector Thomas Nightingale, can do, can call themselves what they like. Peter and Nightingale are based at an old London building known as the The Folly. Together they are the only practitioners serving the UK. If their is wierd stuff going down, be it 'jazz vampires' or trouble with the local River Godesses, which there certainly is, then you call The Folly!

This is NOT Harry Potter. This IS up to date policing with a magical and thoroughly entertaining and addictive twist. CSI really has nothing on these guys!

So, with that really rather hurried back-story to the Rivers of London – which believe me, comes nowhere near expressing how clever, involving and darkly fun and somewhat tongue in cheek the books are – we shall proceed to the actual review. 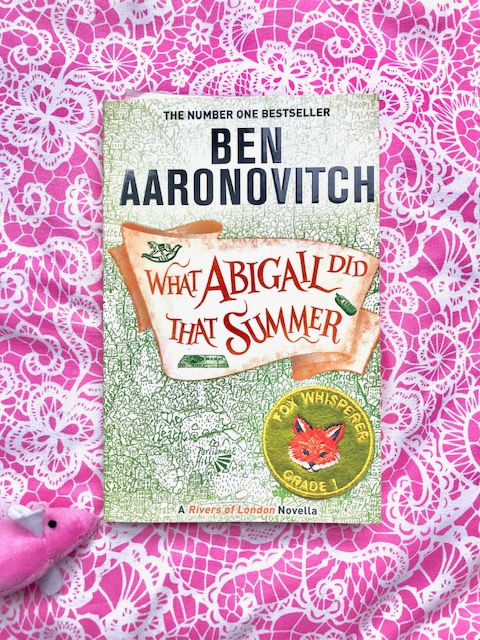 WHAT ABIGAIL DID THAT SUMMER, by BEN AARONOVITCH

Published by Gollancz, an imprint of Orion Publishing.


Abigail Kumara (we'll call her Abigail) is the thirteen-year-old neighbour of Peter Grant's parents and Peter's cousin. She had come to Peter's attention when she was found ghost hunting in a tunnel on an active railway line. Having discovered Peter is a wizard, she is intent on learning magic herself. Later, she earns a nickname/reputation that is really rather appropriate: 'Ghost Hunter, Fox Whisperer, Trouble Maker'.


Our story opens in the 'Achieving Best Evidence' suite at the local police station, and Abigail is there to help them with their enquiries into some missing children. The mother of one particular child, Simon, that Abigail had become friends with, arrives and takes over the meeting. Simon's mum happens to be a high ranking civil servant – of the possible spy kind.

So, at this point, the story cleverly flashes back to how Simon met Abigail some days earlier.

It is the summer holidays, and Abigail is left to her own devices, free to wander around London as she will. With a brother who is essentially terminally ill, her mother has enough on her plate.

Simon says hello to her at the entrance to Hampstead Heath, and thus the two get chatting. Both were supposed to meet someone different there, to take them to some strange 'event/happening', but it seems they have not turned up. So, the two get talking and after doing a bit of cat watching, or rather watching the crazy cat lady who looks after the strays in the area, they head to gates. There they get questioned by the 'Feds' (police) about some missing children. Simon admits to having met one of the girls before Abi could stop him. She has a bit of a record and doesn't want to get involved. So having both given false names and addresses, they escape the Feds, and Simon invites Abi to see his house.

Later, on the way home, Abigail is confronted by a talking fox. Yup, she can talk to foxes, or rather these foxes can talk and want to talk to her. But these aren't your everyday sort of fox. Bigger, better, and in need of someone to investigate something weird they can sense in the area. A brewing menace or something that they really don't like. What they need is someone special. And as to the foxes, Abigail is a 'person of interest' she gets elected.

Is this weird stuff something connected to the missing teenagers? Well, that is where the adventure lies.

Now, this is a short story, 196 pages that fly once you get the swing of the story, which incidentally doesn't take long at all. In fact, you are dropped right into the middle of it when you start. But as I said, you get taken back to the beginning quickly. It may seem strange, but the right moment was picked, and it works really well and delivers suspense.

What transpires next is..... well, let's just say it takes all of Abigail's street skills, a hefty dose of stamina and lateral thinking. Not forgetting a posse of talking foxes that seem to be under the impression they are 1970's secret agents, a hooley bar, and a load of military-strength stink bombs! All in a day's work for Abigail!


Before I say, this is what some newspapers have said:

"Funny and wildly inventive" The Mail on Sunday.

We think that of all the stories we have read of late, this one really takes the prize. Sure, this is a bit different to your usual Middle-Grade adventure, but then, of course, it blatantly isn't.

What this is, is a multi-age range, down to earth adventure magical mystery. It comes complete with brilliant and diverse characters, beautifully executed and with just the right mix of all of the attributes mentioned above, and more.

I have to add that we had bought the Audible version of this to start with. We were so impressed that we listened to the adventure three times! The narration of the story is spot on and highly captivating. If you fancy getting into the real feel for this adventure, and the lingo, then the audiobook is a must. Actually, we recommend the audio for all of the entire Rivers of London series.

Whilst this IS a brilliant story, if you want to take the plunge into the main Rivers series, then we would strongly advise going to the very first in the series. Aptly the first is entitled 'Rivers of London'. If you are not bothered by a couple of spoilers, please just jump in and enjoy this little gem and masterpiece.


Want to buy a copy?

If you'd like a copy of What Abigail Did That Summer to add some foxy and faye hijinks into your life, then please do support your local bookshop first, and send your own posse of foxes to check it out and buy it for you!

The Rivers of London series is published by Gollancz. A link to their website can be found HERE.


So, until next time, we wish you a genus loci free week!

If any publishers, agents or authors wish us to review their books, please do get in touch. Details are listed in our book review page.