This week we are delighted to bring you the first of three books, thus far, featuring Willow Moss and her under the bed monster (NOT a cat) feline-like companion, Oswin.

The books are beautifully and funnily illustrated by the talented Sarah Warburton. This book was first published in 2019 and the third earlier this year.

Before we proceed with the review, we would like to thank concerned readers of the blog who contacted me after reports of the entire parish of Upper Much-Mousing being in a state of siege. It seems that reports of farmer Clarksins sheep foaming at the mouth and running amok in the village had made it into the national newspapers!

An investigation has since revealed that far from being rabid, farmer Clarksin's young son, Eggbert, appalled by the colour of the fleeces, had tried to wash said sheep by pouring two gallons of Mrs Singhs Everlasting Washing Up liquid over them. That, however, is as far as he got before being called in to bed. The ensuing night's heavy rainfall did the rest!

Repeated dunkings have so far failed to rinse the sheep off. So the villagers, and those in the neighbouring village of Much Deeping-Hollow, have spent the last few days bringing all their dishes to be washed by farmer Clarksin's wife and a selection of sheep. Surprising how effective a clean you get from a sheep fleece dishcloth!

OK, so enough the everyday antics, let's get on with this review! 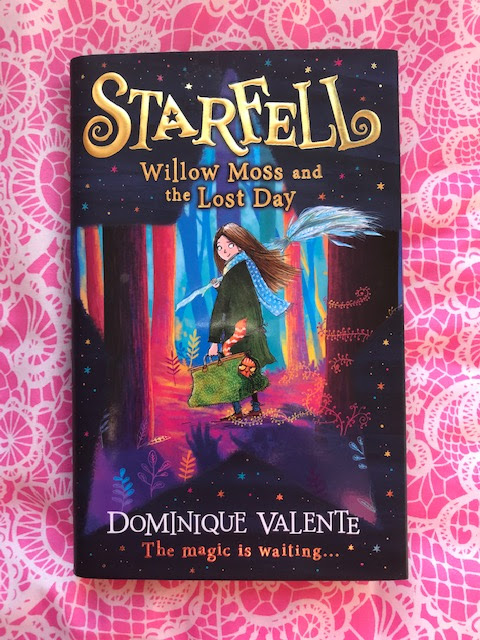 STARFELL. Willow Moss and the Lost Day, by DOMINIQUE VOLENTE

Willow Moss is the youngest in her family. They live near the village of Grinfog, in the kingdom of Shelagh, in the world of Starfell.

A thousand years ago, Starfell used to abound with magic, witches and wizards. Then came the great war between the religious sect called The Brothers of Wol and those that did magic. The Brothers thought magic was all bad, and those born with the gift, unnatural and possessed by evil. When the war had ended, magic had all but been ripped from the land. Gradually though, in time, it seeped back, but not how it was before. The gifts, for that, is truly what they were, were sparse and given to few. It was almost as though the magic was being careful, biding its time...

Willow and her family are some of the few. She, her two sisters and mother are all witches, though she happens also to be the least powerful, and some would say least able of witches. Her skill is for finding lost objects: socks, dentures, spectacles and spoons amongst them. Unlike her sisters, she doesn't command much recompense for her services when she helps those in the village.

One day, the most feared and skilled witch in the kingdom, Moreg Vaine, arrives at Willow's house, sending the awaiting customers scattering in fear. More surprising than that was that she wanted Willow's help.

Why, you ask? What could Moreg lack that Willow has? Well, someone has stolen last Tuesday!

Yup, it seems that the previous Tuesday had vanished, and nobody could remember what they did that day. Even more so than usual. And whatever happened to that day may well cause reality to unravel and Starfell's destruction.

Having packed her possessions for the trip, Willow pulls out by his tail the monster that lives under her bed, a 'kobold' called Oswin.

What you need to know: Kobold's technically only just qualified as monsters. But best not raise that point as they get very tetchy about it. They are also NOT cats.

Oswin may have pointy ears and a nice tail and white paws to add to the appearance of a tabby cat, but he is definitely NOT a cat. He has luminous orange eyes and lime green body fur, and a bright green and white striped tail. At the moment of being unceremoniously yanked from under the bed, his tail was electrified with indignation and his body hair turning from green to pumpkin orange.

He is also, true to all kobolds, the grumpiest, doom and gloom monger of a non-cat individual you could ever wish to meet. That is if he or you ever wanted to meet each other, which is most unlikely. He is also quite good at pinching things. Add to that the risk of exploding if he gets really, really upset, and the habit of speaking what he thinks at not the best of times, and you will get a reasonably rounded description of the guy.

So, with Oswin encamped in a large carpetbag with her change of clothes, the two witches head off in search of an oublier and Tuesday. They hope he will be able to see what happened, and more importantly, who was behind this dastardly plan and what their intentions are! The only trouble is, oubliers are much unliked due to their unfortunate habit of seeing events others would rather keep secret. So, most of them have either met untimely ends, or live as hermits.

If things were going to be as easy as knocking on someone's door or going to the lost property office, then this fab adventure wouldn't be very long or fabulous, and Oswin could have enjoyed the gloom under Willow's bed.

So, from here on in, the magic adventure and fun really starts. As usual, I have to stop just there as there is so much more to be had, in addition to the marvellous fun at the beginning. Suffice to say, along the way, things just do not go as planned. There is, of course, the ever-annoying menace of the Brothers of Wol (who don't go shopping at Wol-mart). There are also dragons, trolls, a nasty witch and some devilish charms to overcome, surprises and shocks, and more than a few secrets to be uncovered. If that weren't enough, why . . . . . OK, I won't tell you about that as it's way too nasty. You will just have to go exploring Starfell for yourself.

I have to say that Oswin is, despite the smell of boiled cabbage, the moaning and groaning, and the 'woe is me' attitude, quite the most splendid anti-companion for Willow. Like Hoagy in last week's review of Maggie Blue and the Dark World, Oswin (along with the other characters) is brilliantly depicted in the artwork that runs through this adventure. He is an instant win in our book.

Willow is far easier to get along with than Maggie Blue. This is likely because Willow's life is pretty much defined from the outset and not based on imponderables and teenage angst.

This does not mean Willow is one dimensional, far from it. In the tradition of the best kids books, Willow is on a voyage of discovery, and uses her talents as best she can, and builds on them too, though not in an excessively overly convenient fashion.

The story really does flow along nicely. All the characters are believable and described and illustrated just how I would like and love to read and see. If it isn't evident from my praise, the pictures really add that extra sparkle to a book that is already brimming with lots of good things. The gold sparkliness on the iced and cream and jam-filled sponge cake.

This was a debut book for Dominique, and a brilliant one at that.

So, having mentioned our loves and with no reservations, we whole heartedly recommend this book to our readers who have kids of their own in need of a fab adventure. There is magic and fun and adventure at the turn of every page. Something to learn too, for the observant, and a message for everyone who has ever been told or who feels they have no talent or worth.

After reading this, I wanted my own 'monster under the bed'. Mrs H has warned me that having me and my own kind of gifts under the bed is "just plenty of that sort of a thing, thank you very much!"

As we have already got books two and three, our following review will be book two: Starfell. Willow Moss and the Forgotten Tale.

To add some magic and some iracund kobold mischief and moaning into your life, then do take the nearest broomstick to your local enlightened and Brothers Wol free independent bookshop.

Thanks for dropping by. I'm off to see if farmer Clarksin is willing to strap those sheep to some sort of automatic revolving apparatus so I can wash down Mrs H's new motorcycle.

Until we meet again, we wish you a week free from missing days and full of literary marvels.